When to peer and when to use transit (White Paper)

An empirical study by Interconnection giant, DE-CIX, comparing and quantifying the performance differences between transit and peering interconnection strategies. 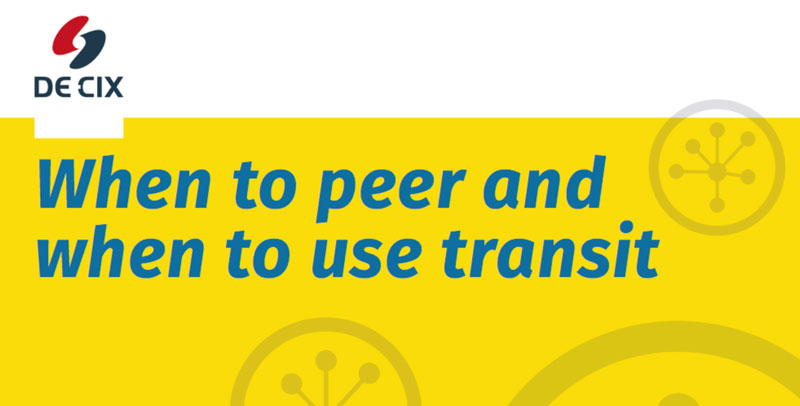 Whether you are a small hosting provider, an ISP, a content publisher, or a content application provider, at one point or another in your network’s growth cycle, you will ask yourself the question: When should I peer and when should I use transit? As soon as you have an ASN and are multihomed, you will think about peering.

The benefits of peering have been stated countless times. Peering reduces latency, improves the network quality, enhances the end user experience, reduces networks costs, etc. But what does that mean exactly?

Peering vs. transit – A performance comparison of peering and transit interconnections

The study used JavaScript to conduct application layer latency measurement between 510,000 clients in 920 access ISPs and multi-homed Content Delivery Network (CDN) servers located at 33 Internet Exchanges around the world. It collected more than one million latency measurements over the duration of about two years. In the following, we will show you some of the study’s results.

While content publishers and Content Delivery Networks traditionally relied on buying transit to deliver their content to end users, today they are deciding more and more in favor of peering relationships with access ISPs (or eyeball networks) to reduce transit costs.

Global Internet traffic volume has increased by more than 40% every year in recent years, and access ISPs are engaging increasingly in peering relationships instead of buying transit.

The results of the above-mentioned study show that:

Read the full paper at DE-CIX.net

How can an IX benefit my community?

Watch Connected Nation’s 1-minute video explaining what they do and why the work they do matters.

“When to peer and when to use transit”

An empirical study by Interconnection giant, DE-CIX, comparing and quantifying the performance differences between transit and peering interconnection strategies.

“Building, not just bringing, the internet in Iqaluit”

Read Jacques Latour’s article on how an IX is changing the lives of the residents of a remote town in Northern Canada.

Find your IX or apply for an IX in your town